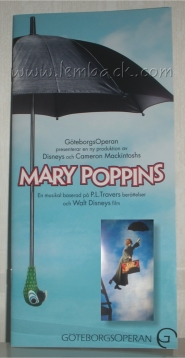 Hubby and me had the chance to see Mary Poppins musical at the Goteborgs Opera yesterday evening, thanks to some good people he happened to get acquainted by chance who generously gave us the tickets for the musical. Honestly, it was my first time to see a musical as I always thought it’s expensive and a kind of upper class luxury. Unfortunately, I do not belong to this class of the society. But when hubby checked the prices in the internet, it turned out it isn’t the price that could leave one’s pocket empty. It’s the price that anyone can afford. Now I’ve changed my view on this matter. It must be a matter of choice and priority when people choose the kind of amusement they want. And musical shows like this are just perfect for an afterwork night out with the family.

Talking about the Mary Poppins musical, it was good to finally see this character in action.  Although Mary Poppins has been a pop-up name of all times, I haven’t read any of the books of this story.  But the musical showed who she was and what she did.  The costumes that the characters used were peculiar to old-fashioned era, so attractive though.  I could say that my over-all impressions of the musical, from props to music and lighting, is excellent.  Except the voice when they speak cos I could hardly understand what they’re uttering.  It was more of a bass voice with full round effect in the ear.  The scary, yet so impressive part was when Mary Poppins flew over us and up to the ceiling.  Geezz, how could the actress have the nerves to do it!

Although we were excited to see the musical, we were both tired from work to grasp the whole thing.  So we thought the next time we should be doing it in the weekend.  I got even more tired when I indulged myself a glass of apple cider before the show, not knowing it contained 4.5% alcohol, lol!  I was feeling a bit groggy in the first show.  Hubby felt sleepy as he took a bottle of beer.  We arrived too early so we thought a refreshment could relieve us from the day’s work.  But it wasn’t as we expected, hahaa! 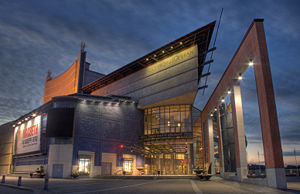 Mary Poppins, the Musical at the Goteborgs Opera