It is always relaxing to sit and stay up so late watching films on Friday nights.  Me and hubby usually sit glued in front of the TV, watching crime series on DVD while munching sweet pastries and gulping a cup of coffee.  It’s the best time to end the week’s hustle and bustle.  Last night was the premiere season of our favorite musical show, Så Ska Det Låta.  After watching half of Midsomer Murders’ serie on DVD, hubby went to bed early and did not manage to watch the musical show.  Instead, I watched it by myself.  Hubby was too tired to stay up late though.

After the musical show, it showed on the TV guide that The Last Samurai would follow right after.  I knew it was a Tom Cruise movie so I thought I would watch it although I am not into this kind of war and warrior movies.  It was a heck of a film, really.  A heavy, bloody film where bodies would fall on the ground lamed and tormented.  The swaying of the swords made me close my eyes to avoid seeing such grotesque scenes.  I could understand why the commentator warned about the film’s content before it was showed. 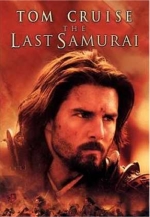 If I may relate the significant plot of the film, it is about a fearless warrior portrayed by Tom Cruise as Nathan employed by a young Japanese emperor to train his warriors to fight with modern facilities like guns and cannons and more.  The emperor was surrounded by selfish advisors who were hungry of trading for money with the westerners and their pursuit to modernize Japan and worse, who dictated him to eradicate the Samurai.  The Samurai on the other hand tried to uphold the gift of their forefathers being the Samurai and would want to continue serving the emperor and the nation.  Nathan trained the emperor’s men to fight the Samurai.  But how Nathan, instead, helped the Samurai to battle with the emperor’s men is a long story.

The battle made the film bloody but the story made it somehow sentimental.  I closed my eyes to skip seeing some scenes but I could not stop my tears from falling to some touching scenes.  The leader of the Samurai portrayed by Ken Watanabe was determined to uphold the existence of Samurai.  He died in the fight but with honor and pride.  The young emperor was strucked by the death of Katsunomu (Ken Watanabe) and stopped further negotiations for more trade and other interests with his advisors and the westerners.  The scene where Nathan turned over Katsunomu’s sword to the emperor really moved me.  When the emperor uttered this line, “We have the railroads, we have the telegraph lines, but we cannot forget where we come from”.  By this, he meant that although they’d succeeded to modernize Japan, they could not deny the fact that they were once like the Samurai with powerful convictions to preserve their own values and reasons for existence.

To relate the film in our present time, the fact that we are living in a modern world, utilizing, even exploiting the modern conveniences around, it’s always worth looking back on the primitive forms of life.  The convictions and values that our ancestors handed down to us are worth the pride, should be recognized and preserved…